It has been a while now since we started our democracy series and we have had other announcements in between but I just want to round this off today with one last democracy blog. Democracy is one of the founding principles of the EU and it is one of the requirements for membership. We looked previously at the structure of EU democracy and then at the structure of democracy in general but today I want to take a look at some real examples of democracies from across Europe to highlight just how different this can be in practice. Europe is very different place and contains a huge amount of diversity and culture across all its countries and institutions and these differences are important to understand so we better understand each other.

Finland is what is known as a parliamentary republic. This means it operates under a parliamentary system where the power is concentrated in the parliament. However as a republic Finland has a President as the head of state. The role does not hold much executive power with the president carrying out mostly ceremonial duties and officially appointing the Prime Minister and other government ministers.

The President is elected every 6 years using a two-round run-off system, where if a candidate receives over 50% of the vote they immediately become President otherwise the top two candidates from the first round proceed to a second round where the winner becomes President.

Different political parties stand for election to the parliament every four years, in regions known as constituencies, using a method of proportional representation known as the D’Hondt method. This simply speaking gives a proportional number of representatives in the constituency, called Members of Parliament (MPs), compared to the number of votes for each party.

This system results in a very diverse range of political parties in the parliament. As a result of this is it almost impossible for one party to win a majority and so a coalition government must be formed. Following the announcement of election results a process of negotiation led by the largest party attempts to form a government and set a legislative agenda that all parties can agree upon.

Proportional representation results in the most representative form of government with each vote counting towards a candidate of your choice and each distinct view and group of people being represented in the parliament. This can also mean with such a large amount of diversity and differences that it is hard to find common ground amongst political parties and negotiations can be long and often result in deadlock. 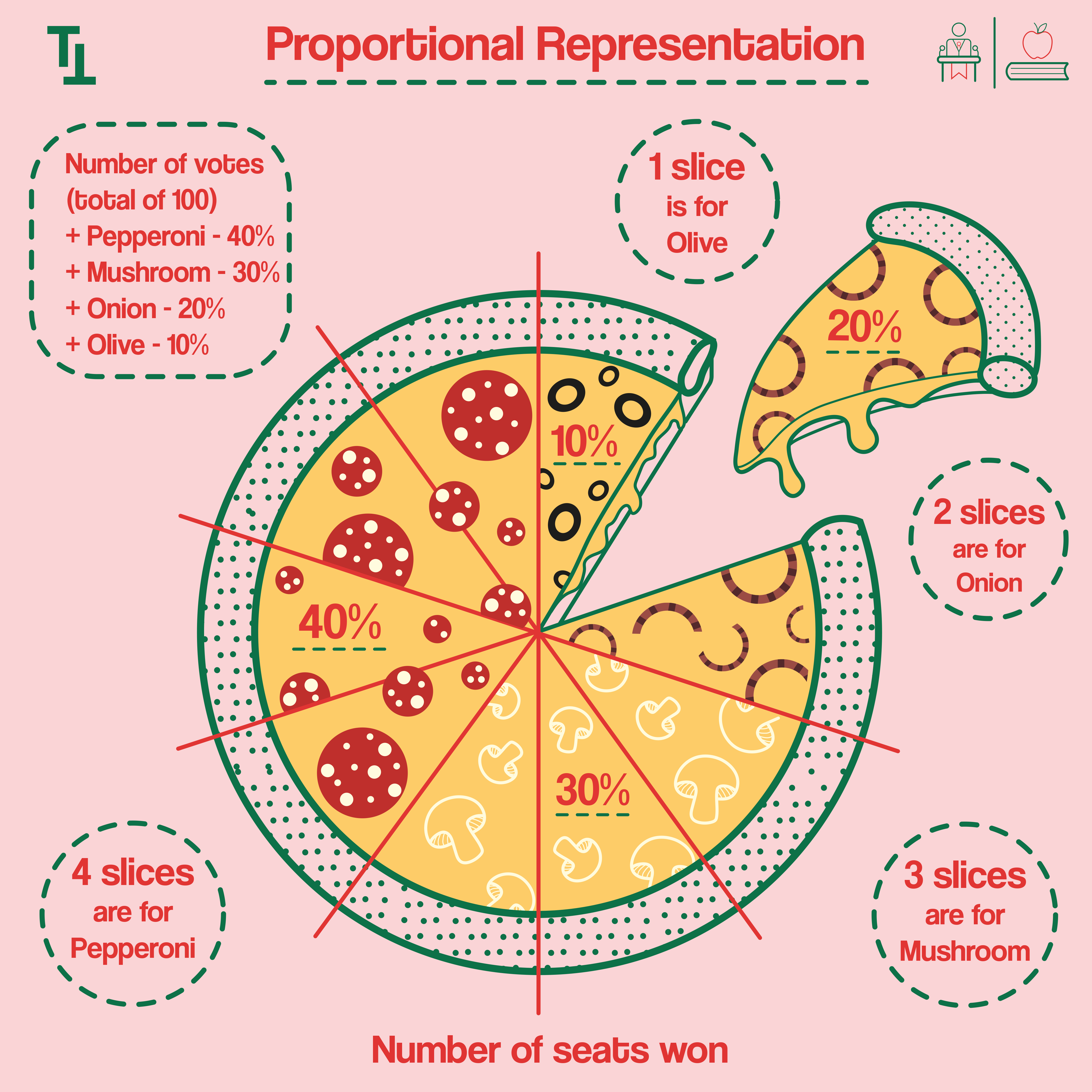 Once the parties conclude their negotiations and form a government the President can then submit a nominee to parliament for Prime Minister, usually on the basis of which party holds the most seats. This nominee must then be voted on and receive a majority of votes by MPs to be appointed. The Prime Minister leads the government and directs its agenda as the head of the government.

France’s current system of government is known as the Fifth Republic. This was set-up in 1958 to increase the powers of the President and operates under a system known as a semi-presidential republic. This is a similar system to Finland but where the Prime Minister and the President both wield executive power.

The French president is elected every 5 years through a system of run-off voting, can serve a maximum of two terms and has some of the greatest Presidential powers in Europe. The President wields two types of executive power, personal and shared power. The President personally has the power to appoint whoever they chose as Prime Minister from amongst the majority elected at the National Assembly and also wields the power to dissolve (dissolve is a fancy political word for scrap and start again) the National Assembly providing it has not already been dissolved in the previous 12 months, leading to new elections. The President also gets to appoint up to three members of the constitutional council the country’s highest constitutional body. The most criticised aspect of Presidential power is that they are granted crisis powers in the event of a very serious institutional or political crisis which could constitute a serious and immediate threat to the institutions of the Republic, the independence of the Nation and the integrity of the territory. These crisis powers have no fixed term limit and grant the President complete control of legislative and executive power.

The UK is what is known as a constitutional monarchy, this means that there is still a reigning monarch but that the powers of the monarch are curtailed and law-making rests with parliament. All the actions of the parliament and appointments to government are done ceremonially in the name of the monarch however the monarch does what is asked by the parliament and abides by the decisions of government and elections without providing their own input. The Monarch is not elected but coronated by birth right.

As separate countries each of the four countries of the UK except England have their own parliament that deals with internal domestic issues. These ‘devolved’ parliaments are responsible for a range of domestic issues however ultimate sovereignty and all foreign issues are controlled by the UK Parliament in London.

First past the post is a much less representative form of election than proportional representation and its failing can be in that a candidate only needs more than each other candidate to win. This often results in a situation where the majority of votes are cast against the winner, as can be seen in the infographic 58% in this case did not vote for the winning candidate. The stated strengths of first past the post are that it tends to produce a majority government and grants one party a mandate to govern effectively without resulting in parliamentary deadlock. 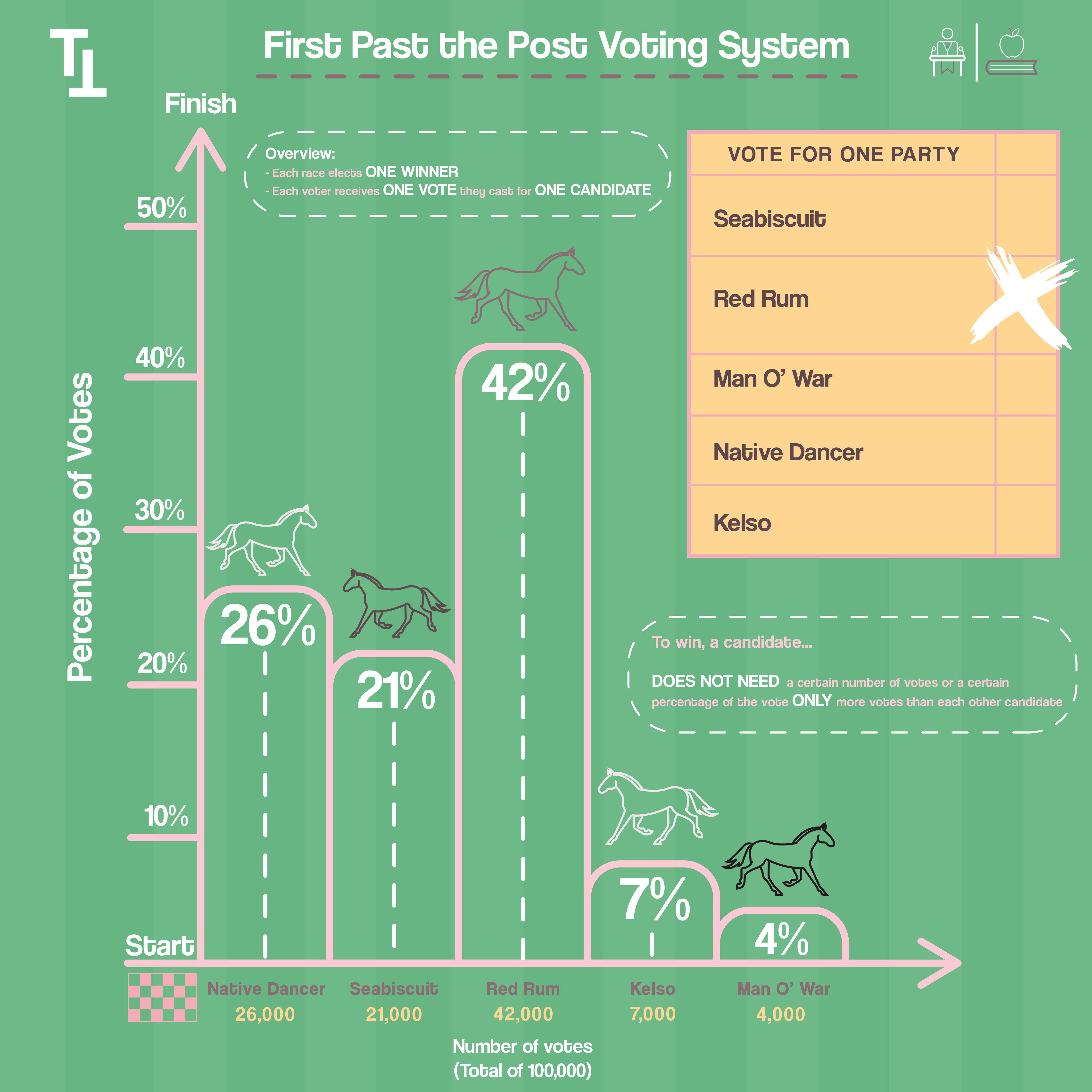 So, there we go, this just touches on a few countries in Europe, but you can see how very different these systems can be. Next blog we will look at something very different. Today has been about how important it is to understand how democracy works if you are to participate in it as well as how different it can be. This is all useful to know so you can understand how complex the EU is and how difficult it can be to encompass all different types of system under one roof but how important a goal it is.