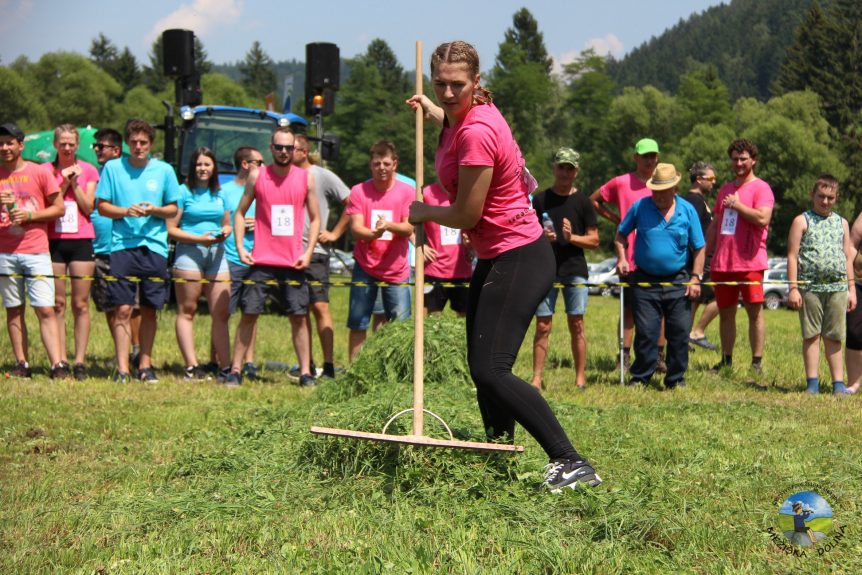 150 competitors from twenty-five teams, 21 teams from Rural Youth Clubs from nine regions of Slovenia, 2 teams from Switzerland and one team with Dr. Aleksandra Pivec, Minister of Agriculture, Forestry and Food, at the helm, and the Agricultural chamber team competed in the Farming Games on July 6th in Carinthia, Slovenia.

The highly anticipated event, that attracted a great audiance, was organised and planned by Rural Youth Club Mežiška dolina, after last year’s victory at the 32nd National Farming Games in Tabor. The event, according to the President of Slovenian Rural Youth Association (ZSPM) and other guests, exceeded all expectations.

The purpose of the Games is to preserve rural tradition and, first and foremost, for young people from the countryside to socialize. The Games were also attended by Agricultural Minister Dr. Aleksandra Pivec, who addressed the contestants, saying: “Take us seriously and compete so that we will not beat all the teams in the end.”

Before continuing the fun games, the Miler Mechanization and ITRO company, also the event’s general sponsors, performed a mowing display and harvested grass. Then the fun games, which were put together and chosen by the organizers, continued, with the “log pulling” we wanted to pay tribute to the grandmothers and grandfathers, who used to make money for their livelihood in those days with manual harvesting of wood, since Carinthia has always been overgrown with the forest. The inspiration for the game “Bohvoni for pears” was obtained from the folk tale: How did the bear shake the pear (Folk tales, Vinko Moderndorfer), where a competitor sitting on the shoulders of another competitor had to use a “bohloni” to pick pears from a string, the other four runners, who were standing in the ladder, had to carry these pears through the obstacles into the crate at the finish. For the last game, the organizers prepared a game called “štafeta mošta”. A game about a drink that is increasingly recognizable and appreciated among people in Carinthia. Of course, water was used for the game, which had to be carried across the bar by all six competitors in a cup, which they had to hold between their teeth. In addition to the presentation of agricultural mechanization, the daily activities were varied by the societies and surrounding farmers on the stands.

The event was also a culinary experience with eating and drinking at the Marin-Miler Farm from Šentanel, who have, among other things, prepared “peacock burger”, “crochet noodles”, “empanadas with geraniums”.

The organizers – Rural Youth Club Mežiška dolina would like to say THANK YOU to all those who financially or otherwise supported the event and to the members of the clubs who have been breathing for weeks for this event and without which the event would not have been possible. To all team’s congratulations again, and thanks go to the Agricultural Ministry and Agricultural chamber team for their cooperation and trust in rural youth.