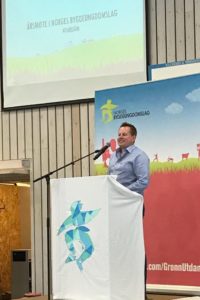 I’m on my way home after an impressive few days and putting down some thoughts… because I just have to share my recent experience!

Throughout the year the board members of RYEurope try to visit many of the events of member organisations to get to know how those organisations operate, to see if we can increase collaboration and share news from across Europe, so we’re always glad to receive invitations.

Every year in July, the Norges Bygdeungdomslag (Norwegian Rural Youth, or NBU for short) host their summer festival called ‘Landsstevne’ and combine it with their General Assembly, which I attended this year.

The meeting included a representative from each club of NBU so there were over 160 voting delegates representing their membership of nearly six thousand.  The meeting lasted 2 days and covered all the usual business of the organisation (finances and so forth), elections of the new board and other topical issues which the organisation has a view on. The participation from the floor was very good with lots of members having good quality input to the discussions, with some informal encouragement via a points system for contributing.

I was also able to greet the meeting on behalf of RYEurope, to explain about the European network and how their members can get involved with our events.  It was a great opportunity and led to many individual conversations afterwards with NBU members wanting to know more about other rural youth organisations.

The summer festival which started following the General Assembly is attended by around 2,000 members and I was able to see the start of this for myself too.  Each region of Norway takes it in turns to host the event and this year it was in Ostfold at an agricultural college with plenty of space.

However, what is really impressive about this event is that it is entirely organised by volunteers.  Conservative estimates suggest that there are around 9800 hours dedicated to make the event happen, which is the equivalent of nearly 6 full time members of staff for a whole year!  The standard of the organising was also very high and everything catered for from the entertainments, refreshments and security – again, also done by volunteers from each club.

As with all rural youth, it was a great crowd to be amongst and I felt very at home and welcomed.  The locals were of course keen that I tried some of their Norwegian specialities, local traditions and of course the dancing. ?

Thank you to NBU for the invitation and congratulations for the fantastic event.