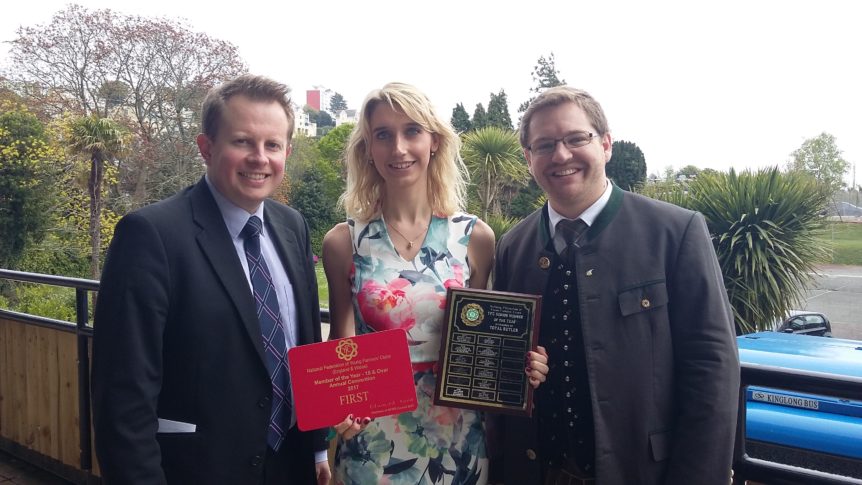 When I joined my local Young Farmers club (YFC) at the age of 12, I never even knew there was more than a couple of clubs in my area.
I remember being asked how many clubs were in the National Federation of Young Farmers Clubs (the national organisation for young farmers in England and Wales) (NFYFC), and I said ‘about 100?’ When the interviewer informed me there were 644 clubs with 25,000 members…I suddenly realised I was part of something which was much bigger than I first imagined.
So, when I was awarded Samlesbury YFC (my home club) member of the year in September 2016, I was thrilled to bits. But that’s where I thought it would end. At that point in time, if you would have told me I was going to win the NFYFC Member of the Year, I would have laughed in your face!
All those members – and somehow, they chose me. It’s been a week since I won the award, and still I cannot get my head around it.
The Senior Member of the Year Competition consists of a series of interviews, different panels of judges and the ability to speak proudly about your contribution to the Young Farmers Movement. The purpose of the competition is to find the member who best represents the Federation and for me, winning was the proudest moment of my life.
The process of winning Senior Member of the Year was a long one, and as mentioned, started back in September 2016.
In Lancashire (the county in England where I live), our YFC’s are split into six regions, which lie in the county federation. So the first round was against one person from each of the six clubs in ‘Bowland Region’.
At the time of the first interview, I had recently been made redundant from my job, and considered not turning up to the interview because my faith in myself had dropped to an all time low. But my YFC friends knew exactly how to boost my confidence and it is thanks to them and my family that I actually turned up and sat in front of the interviewers ready to be grilled on my YFC involvement.
After I won Bowland Region Member of the Year, I was pretty convinced that was actually where it would end.
I then had to compete against one person from each of the six regions in Lancashire. I arrived at the interview to see a group of people I knew did an awful lot for the federation and who all equally deserved to win. I was not convinced at this point that I fitted into their category, but I was there and had to give it my all. The beauty of YFC is that even though we were all competing against each other, we all equally wanted each other to do well. There was no malice or judgement – we were all there as proud members of the same federation, and we all wanted each other to succeed.
Being awarded the County Member of the Year at the County annual general meeting (AGM) in December remains one of the proudest moments of my life. I was starting to get an inkling that I was doing okay at this…but still didn’t want to believe I could get any further.
The Northern Area round (for counties in the North of England) ran the same way – except this time, I was so convinced I wasn’t going to be placed that I texted my mum to tell her so. ‘Mum, they’ve all turned up with big portfolios and certificates and all sorts and I’ve not even brought a pen’ – but my mum, a former Young Farmer club member herself, just said ‘you’ve done so well to get this far, don’t worry.’
And then when they announced I had won – my friends literally had to push me up off my seat to collect the award. This was all getting way too much for me and I could not stop shaking. Pat Bell, president of the Northern Area had to take my stunning glass trophy off me for fear of me dropping it through shaking so much! And then came the realisation – oh my gosh, now I need to compete at the National competition for all of England and Wales. Oh help.
And that’s how I got to my greatest achievement to date on April 23, 2017. I got there believing I would never get there – but everyone around me had enough belief and supported me every step of the way. 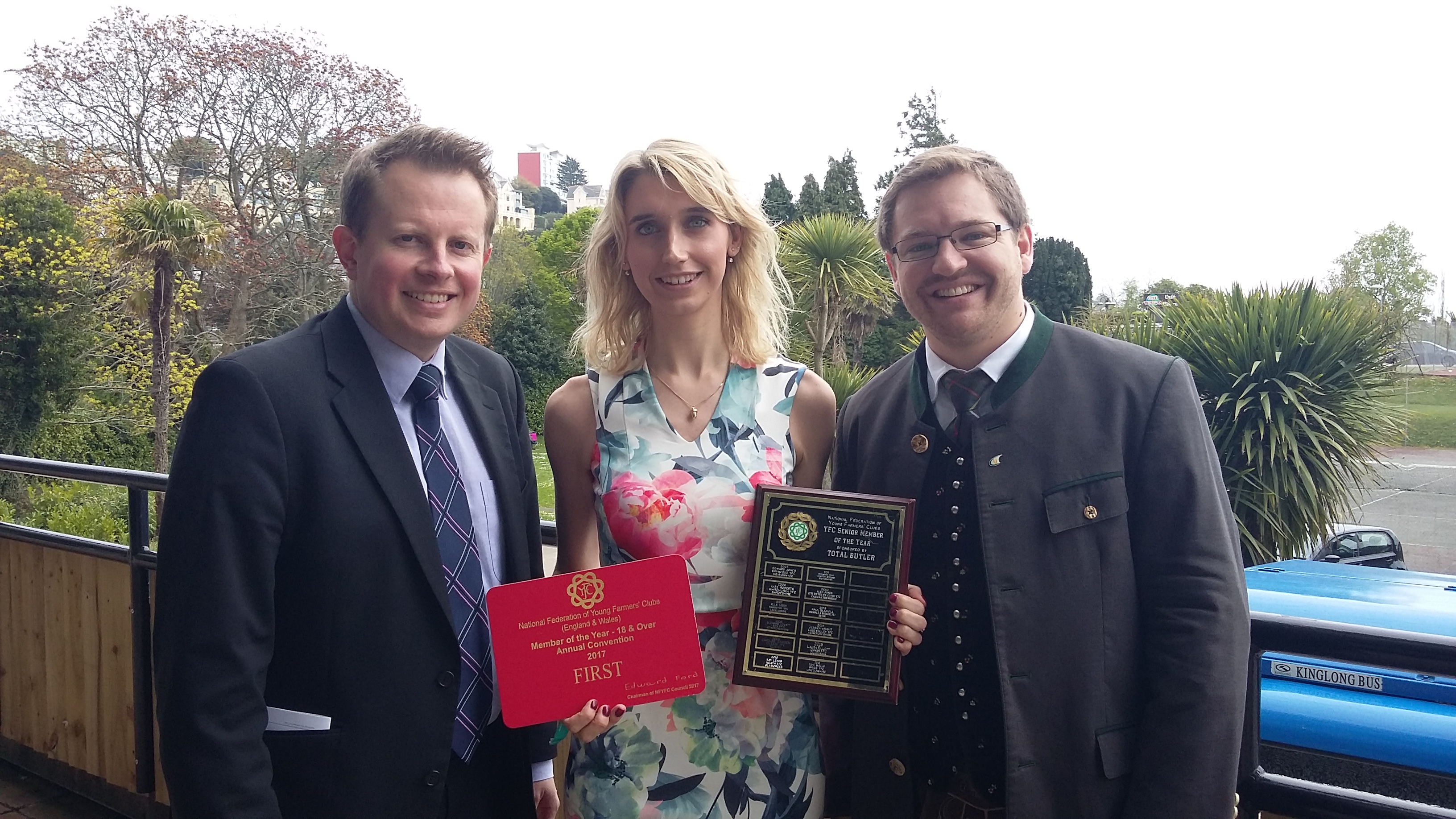 RYEurope chair and vice-chair Russ Carrington and Sebastian Lassnig meet Senior member of the year winner Alice May Singleton at the NFYFC annual convention
The Young Farmers clubs are a federation like no other, and without it I would not be here to tell my story. Life has a way of throwing obstacles at you, and for every one, I have had YFC to thank for helping me over the hurdles. The friends I have made in YFC, from all over the country, are friends for life – but that is just one thanks I have.
In my final Member of the Year interview, I was asked what I had discovered about myself through YFC. And my answer was this:
“What I have discovered through my time at YFC is that I was born to be in this federation. I never really knew what I wanted at school – and my class mates laughed when I said I was a Young Farmer. It bothered me then, but when I rejoined at the age of 20, I realised this was where I was meant to be. This is where I am happiest, most confident, and where the real me comes alive.”
And it is true. Be it right or wrong, YFC sits very high up on my priority list, because you really do get out of YFC exactly what you put into it. I put a lot of effort into helping my club and county members make the most out of their YFC membership. I help them promote their clubs to ensure they continue in a time of uncertainty in the farming industry, and I enjoy every second of it (even the stressful ones!)
I could never have dreamed I would win this and without sounding too cliche, I do believe it has changed me. I now have to believe I can do this – because I have the proof that I can! I survived four grueling interviews talking about myself, so now I have to be confident in my abilities.
Following my award and new found confidence, I would like to take on further roles in the NFYFC structure, with one day maybe making it right to the top where Ed Ford proudly sits at the moment. I have YFC to thank for making me the person I am today, and I am a very proud member of National, Northern Area, Lancashire and of course Samlesbury YFC, where it all began. 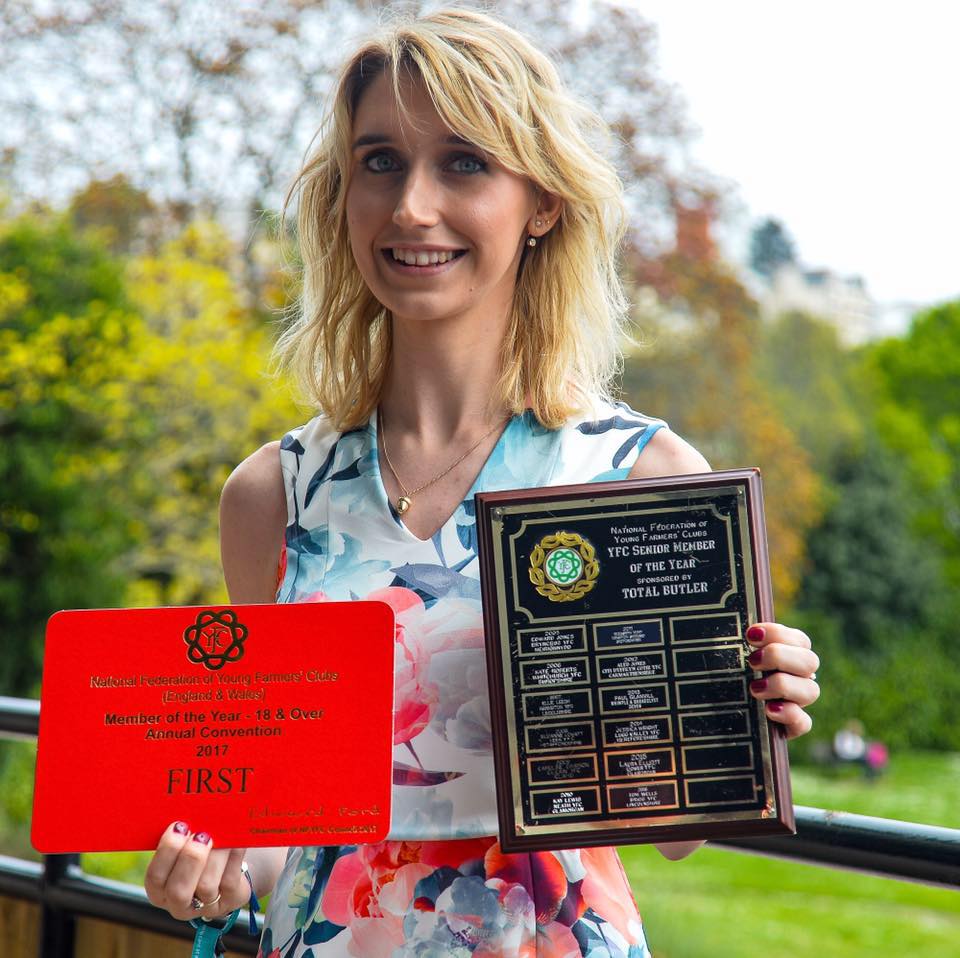