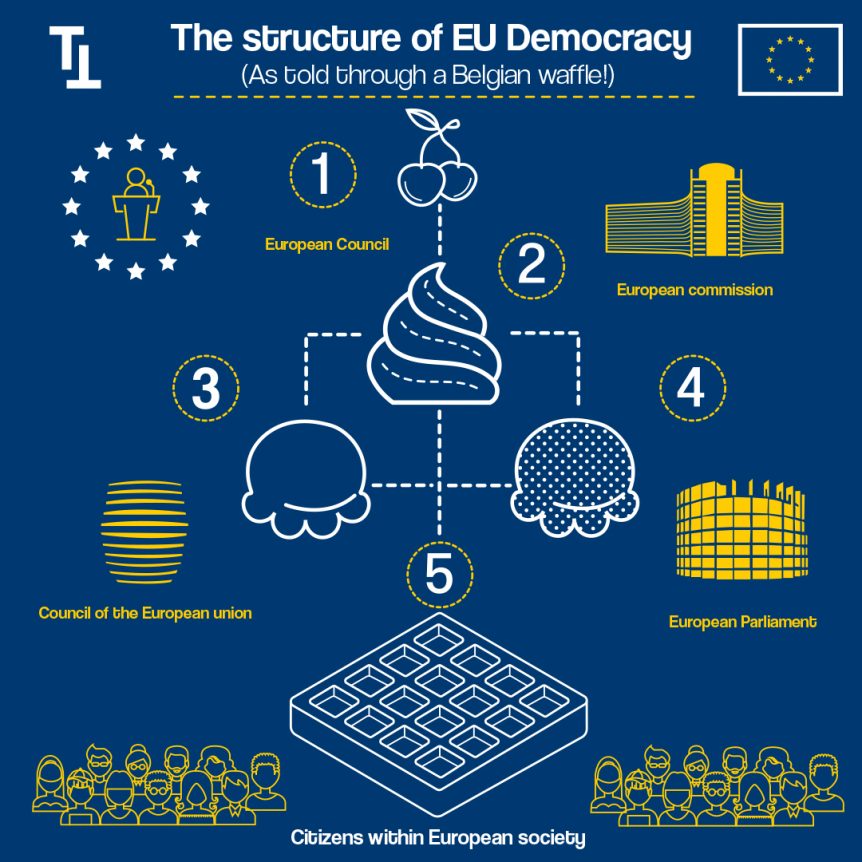 The Together Thursdays project in a nutshell is all about connecting the European Parliament with the rural youth in order for us to facilitate a conversation about what the EU does well and what you feel could be done better. Just saying the EU though is a bit vague because of course, just like any other organisation, at all levels it is people working there who actually make up the EU. Some of these people are elected officials and some are civil servants. With our own General Assembly this week on Friday the 6th of August and the election of new board members taking place, it seems like a good time to talk about who these people that make up the EU are and how they are elected. So this week I want to talk to you about the three main institutions that make up EU democracy, what they do and how their members are elected.

Who is what now?

This is the highest level of political cooperation between EU member states and is composed of the heads of government of all EU member countries as well as the President of the European Commission and the European Council President. These people come together at least twice every 6 months (if this seems low, remember the heads of governement are normally in their own countries helping to run the government). Here the members set the EUs overall direction and political priorities, they also are the highest form of international diplomacy between member states and as such are capable of dealing with the most complex or sensitive issues that cannot be resolved at lower levels of government interaction.

The way the members are elected depends entirely on the democratic system used in the member state they represent. This might be through a direct election to be President such as in France or appointed to be Prime Minister as head of the largest party elected to Parliament such as in Finland. The European Council President is appointed by the members of the European Council to serve a 2.5 year term, this is currently held by Charles Michel, the former Prime Minister of Belgium.

The Council of the European Union

This institution, handily given almost exactly the same name as the institution above, works completely differently, is composed of different people and does a different job (I told you this was confusing but bear with me). The Council of the European Union, often just known as the Council, together with the European Parliament makes up the main decision-making body of the EU. This has no permanent members but constitutes government ministers from each member state of the EU. Which ministers these are will depend on what issues are being discussed at the time, so finance ministers will go to discuss finance but transport ministers to discuss transport. The ministers involved have the power to commit their own governments to decisions made and represent the interests of their own member states.

The way these members are elected will depend on the democratic system used to appoint government ministers in their own countries. The presidency of the Council is granted to a country, not a person, and this changes every 6 months on a rotating basis and is currently held by Slovenia.

The European Commission is the sole body responsible for proposing EU laws. They are what is known as the executive branch, they propose laws and set the legislative agenda according to EU priorities and in order to protect EU citizens where issues cannot be dealt with nationally. They set EU spending priorities, draw up the budgets and supervise how the money is spent. They also represent the EU at an international level on behalf of all EU countries.

How does it all work?

So as simply as possible:

Ok! We got there! That’s it. In practice it gets a lot more complicated, but hopefully this has provided a basis for understanding how the EU and its democracy work. Next time I will talk about different types of democracy within Europe, but for now it’s time for our own Rural Youth Europe democracy with our board elections tomorrow!