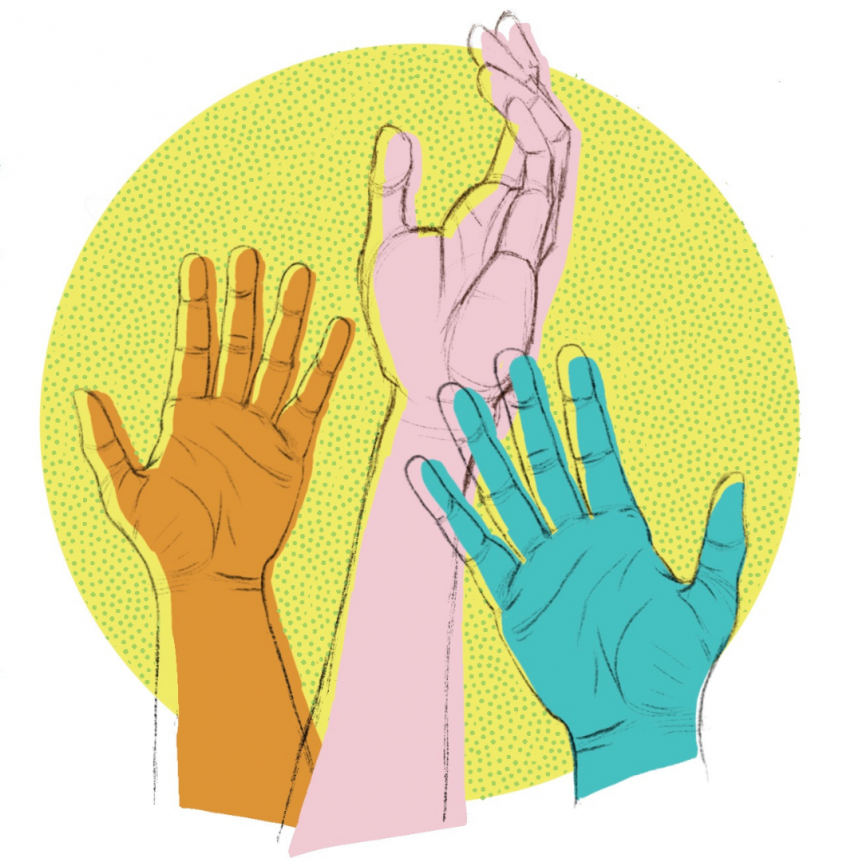 What is youth participation?

The first question to ask is participation in what?

When we talk about youth participation and participation of any kind what are we participating in? It could be in almost anything, your school, your club or organisation, your home and family life, your life with your friends, your hobbies and sports, politics and human rights. We tend to call the combination of all these things your community. Some parts of your community are your local community and the people closest to you, some parts are the laws of the state, the government and the wider country you are from, and some parts of your community are the whole world. There are many levels of community and many levels of issues and how these are addressed and how involved you can be are questions of scale.

We can identify 4 main areas in which you relate to your community and can participate in it.

The cultural dimension is arts, music, dance, singing, visual arts, literature and all kinds of other things. Culture is local culture and traditions, languages, dialects and foods.

The social dimension is the way in which we relate to involvement in the life of a local community, addressing local problems and challenges. This is how people come together and interact with each other in various sized groups, how these groups fit together and interact and how equally everyone and their interests are represented.

The economic dimension relates to employment, careers and work in general. It is about economic development and equality, eliminating poverty and ensuring there are jobs and houses and infrastructure for all in all the regions that people live in.

Participation is defined in a number of ways but perhaps my favourite is:

– “In a nutshell participation means to be involved, to have tasks and to share and take over responsibility. It means to have access and to be included.”1

Participation is not just about being involved but being asked to be involved. It’s about being asked for your opinion and then listening to the opinion of others. It’s about being included in the decision-making process and helping to affect the outcome. Responsibility has to be offered before it can be taken. Taking an interest in something requires a community to take interest in and the ability to work on, discuss and change the area of interest.

It’s quite common for youth viewpoints to be ignored or undervalued citing lack of experience and discipline. Where is this experience and discipline supposed to come from if the available involvement is lacking? I know everyone at some stage in their life has been told their ideas are unrealistic and the result of youthful excitement, but if I tell people their ideas are boring and not daring enough as a result of their being old and out of touch, suddenly, I’m in the wrong? I have met 16 year olds with wisdom and ideas that could revolutionise the world and 40 year olds with no idea how to use their own washing machine. Age is never a good stand-alone metric for anything. In exactly the same way that we should not use race, gender or religion to prejudge and prejudice groups of people we also should not use age. Too often are young people seen as simply a vulnerable group to be protected and managed needing the intervention of ‘adults’ who know best for them. Instead, young people are a vibrant, resourceful group with new ideas and great motivation, and it is up to all of us to make sure that this group is represented and has its say.

What can go wrong?

One of the dangers of youth participation and, something I am sure all of you have experienced from time to time throughout your lives, is youth participation as a token gesture. ‘The youth’ are involved, a token young person goes on the front page of the website with an inspirational quote, job done. Where having a couple of young people on

the team or involved during the process gives the impression that those young people have been listened to and allowed to steer the activity but in the end the young voices are drowned out or ignored while the ‘adults’ in the room make the choices anyway. The organisers of these activities might really feel like they included the youth just by having them there or by asking the opinion of a young voice, but imagine the outrage if you went to your community leaders and told them you were just looking for the opinion of an old person. It is important to remember that participation is not an end in itself but a way of including people in the decisions and responsibilities of life. It is important to include everyone because the community includes everyone from all walks of life with all kinds of motivations, passions and experiences, and by including everyone you can get the best end result.

Another very important part of participation is making everyone feel welcomed and wanted. By asking for opinions and delegating responsibility people will feel more at home in the community and more involved, this in turn leads to greater motivation and drive and even more inclusion.

The ladder is just a tool for representation, but it is widely used by various institutions and understanding it will help to understand the attempts to increase youth participation we will look at next time. 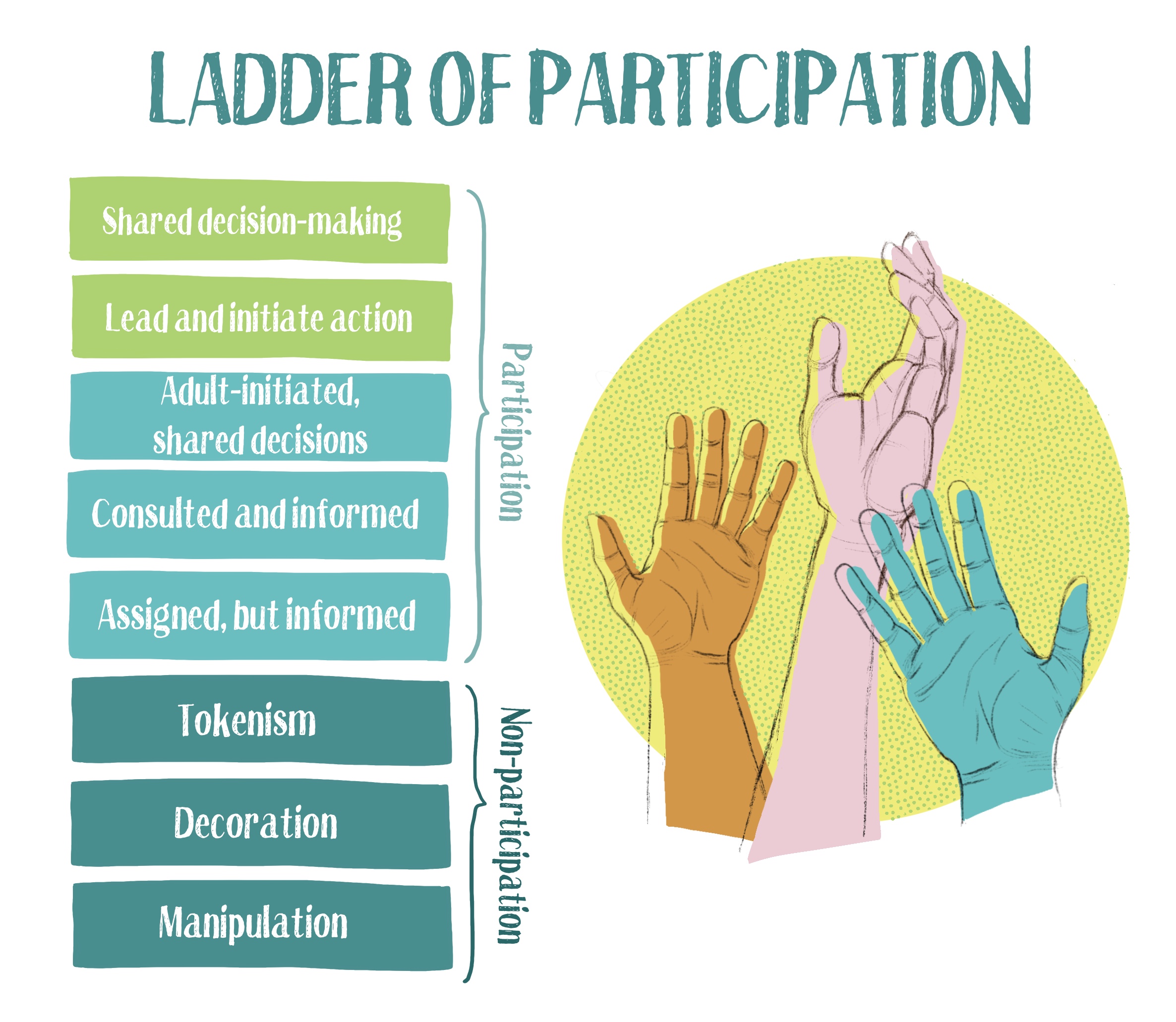 This is full cooperation between younger and older generations resulting in partnership in the decision-making process. Projects and initiatives are proposed by young people and adults are invited to take part and share in the process as full partners.

Projects and initiatives are proposed and lead by the youth and older generations are only involved in a supportive role if at all.

Older generations propose and initiate the projects and proposals but the decision making is shared with the youth.

Older generations propose and initiate projects. The youth are informed and consulted as well as told how their input will be used but all decision making is ultimately made without them.

Young people are assigned a specific role and informed how and why they are involved.

Young people are included in the project but have no decision-making powers or influence. They are given roles to fill but have no choice over how they participate and what they do.

Young people are needed in the project to be shown as a group to be protected or influenced. They have no role other than to be present and put in a position of visibility for project presentation.

Rung 1 (Bottom of the ladder)

Young people have no input on the project at all but are shown visibly to make a point or gain influence such as to win a local election or generate a better image for the project.

Here at Rural Youth Europe we are working on a number of ways to increase youth participation and how to find out what it is you need and want, from your local area, your country, all of Europe and the world. In the next Together Thursdays blog I will go into detail on how our activities will increase options for youth participation, what organisations we work with on this and how you can be involved and have your say heard.

So finally on the subject of participation I would like to leave you with the parable of Boaty McBoatface. A British research vessel owned by the Natural Environment Research Council, to be operated by the British Antarctic Survey was launched to much fanfare as one of the most advanced research vessels ever built. The naming of the vessel, in what might be a spectacular misunderstanding of internet culture, was given over to the public via an internet poll. The internet community got together and voted overwhelmingly for the name Boaty McBoatface with 124 109 votes. The runner up name for the vessel was Poppy-Mai with 34 371 votes. Now this is honestly what you get when you ask the internet for an answer, and given some of the other discussions on the internet it could have been much worse. The vessel was of course named the Sir David Attenborough to much disappointment. Now don’t get me wrong, I think David Attenborough’s work and contribution to conservation and the natural world are outstanding and his nature documentaries are some of the finest ever made, and if you have not seen them, I highly recommend it. Maybe he deserves a research vessel named after him, maybe it is a good choice of name but, why ask everyone then? What was the point of the whole exercise? Boaty McBoatface was obviously seen as too silly and not important enough, but could the name of the vessel have affected the quality of research it was capable of doing? Is sticking rigidly to what is proper and not too ‘childish’ really the best way to engage people or present the best results? How many people quickly lost interest in the Sir David Attenborough as soon as their voice was casually dismissed again? How many would still be following the adventures of Boaty McBoatface now?

1. Lauritzen, P., keynote speech on participation presented at the Training Course on the development and implementation of participation projects at local and regional level, the European Youth Centre, Strasbourg, June 2006.