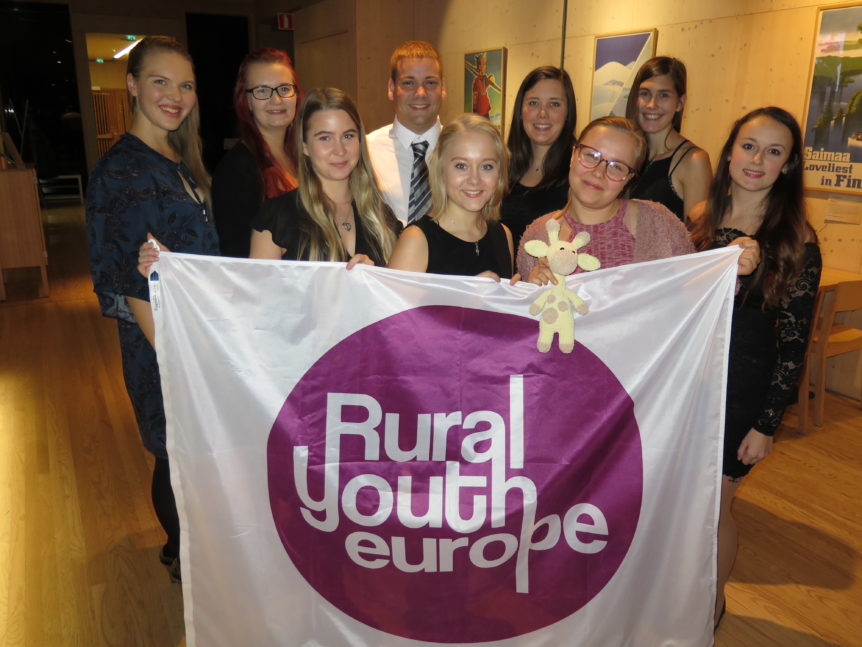 Rural Youth Europe’s Autumn Seminar 2018 took place in Finland from 4th– 10thNovember. The event took place in Solvalla Sports Institute in Nuuksio, Espoo, and was organised by Finnish 4H. At the Autumn Seminar participants learn about specific topics via different workshops, learning methods, excursions and discussions. The theme of this year’s seminar was “Media Crossroads”. During the week participants gained knowledge about media literacy, critical thinking and participation in media.

Every seminar day had it’s own topic. The first day carried the name “Media and I” and during the sessions  participants had a chance to get to know each other a little better by doing an online research on each other. The findings of the research made a good base for conversation about media behavior and risks and opportunities in media. On the first day there was of course time for ice-breaking and teambuilding games and getting to know the venue. The participants also heard presentations about Finnish 4H, Finland in general and Rural Youth Europe.

The second day was entitled “Media formats and critical reading”. During this day participants got more familiar with different formats of media and how people can participate in each format. There was also a session with examples of Finnish organisations and individuals who are working to support media criticism in society. Participants had a task to come up with ways to fight against false news in their own organisations. There was a lot of great, concrete examples on how Non Government Organisations can support truthful publishing about specific topics; for example agriculture.

The week continued with a day called “Media and society”. This day included a living library session with discussions about different ways to participate in society. There was also a session about media in decision making during which smaller groups of participants discussed about different topics; for example human rights and democracy, and how these themes are seen in media in the context of decision making. During this day there was also a session about hate speech, which challenged participants to rank a list of statements on a scale from the act of freedom of speech to the act of hate speech. This was done in pairs at first, and later with the whole group. Over a deep discussion the participants came up with mutual idea of the final ranking of the statements.

The final daily theme of media was called “Media and youth participation”. On this day the whole group visited Finnish 4H and RYEurope offices in Helsinki, and heard a presentation about Verke, which is the national Centre of Expertise for Digital Youth Work in Finland. In her presentation, the member of Verke staff talked about Verke’s goal to help youth workers use digital media and technology in their work. After the presentation the participants had the opportunity to explore Helsinki for a while. In the afternoon participants worked with media strategies by using for multiple methods, including play dough.

The final day of the seminar was all about wrapping up and evaluating the week. Since the theme of this seminar was media the participants had tasks to create different kinds of social media posts during the week. On the final day all the posts, videos and blog texts were presented to the whole group. The participants also had the chance to give feedback about the week. The final evening included a guided tour of the Finnish Nature Center Haltia, a dinner in the restaurant Haltia, and handing over the Youthpasses. After the formal program started the participants evening which included games and dances that participants taught to each other.

Even though Autumn Seminar is much about learning, on each day there was also time for more a more relaxed program. In the evenings participants had, for example, a night walk among the natural park of Nuuksio, an international evening with samples of food and drinks from each participant’s home country and a Finnish Pre-Christmas evening with sauna and members of Youth Committee of Finnish 4H teaching games.

Over all the autumn seminar of 2018 was very successful, thanks to active participants and a great team of both local and international prep team members. As the person in charge of this seminar I could not have been happier when I saw new friendships developing, or more impressed about the work of both participants and prep team. For me it was a perfect opportunity to learn about leadership and project management and I am grateful to Rural Youth Europe and Finnish 4H for giving me this opportunity.  I hope the participants enjoyed the week as much as I did!